Oops! It appears that you have disabled your Javascript. In order for you to see this page as it is meant to appear, we ask that you please re-enable your Javascript!
Pages Navigation Menu 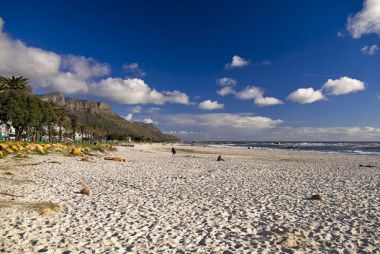 Under the looming Twelve Apostles and Lion’s Head, with views out across the turquoise-coloured sea, Camps Bay sports some of the trendiest places in Cape Town to see and be seen.

Head south from the beaches of Clifton (or north from the buzz of Sea Point) and you’ll discover the chic suburb of Camps Bay. The main drag, Victoria Road, is jam-packed with funky restaurants, trendy pubs, and bucket-and-spade shops on one side, and a palm-fringed beach on the other.

It’s here, on the white sands of Camps Bay, where you’ll find bronzed and buff locals and visitors flexing their muscles and showing off their volleyball skills. While supermodels and rock stars of the world are known to hang out at Camps Bay, it’s also a great place for families – the sandy beach is wide and flat, and parking is sometimes more available than at nearby Clifton. During the Easter break and around the Christmas holidays, Camps Bay is packed to the brim.